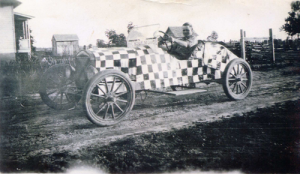 I met Oscar by chance in about 2000 while looking for another Oscar Swanson who had the Swanson- Berger Garage in Gothenburg, Ne and built race cars in the late teens and early 20’s in his shop. The Oscar pictured here was a most interesting character and a story I was most regrettably,unable to complete . This guy had recently completed a manuscript for a book of his travels in the 20’s thru the 30’s across the West and South West. He asked me to edit it for him which I wholeheartedly admitted lack of qualification for such an endeavor, but after jubilant persuasion on the matter, I agreed to read it and see what I could do, he was 92 at the time as I recall.He and his brother built the car above and his mother , get this , hand stitched a cloth body for it in the pattern shown. The boys were quite proud of it and drove the wheels off it, wrecked it a couple of times, with the cloth body surprisingly durable according to accounts. He then left home to find work and traveled to the mild season in the West where he became acquainted with the Hobo life along the rails. It was a most intriguing story of the life and times of several of his friends he met along the way. He learned to box at the hobo camps to earn money and food, shelter etc.. He also became a fairly successful rodeo hand and once won a Silver saddle in California which I did see for myself and it was the genuine article, being familiar with the silver saddles of the Foxtrotters the folks broke and showed in Missouri. After he returned home from his travels he bought a small farm south of the tracks in the town of Gothenburg. I remember the place as my great grandfather and grandmother Portinier, lived but a short distance West from his farm. After our first meeting and as I got time, I would read the manuscript. While still in the process, I got a call from Oscar’s daughter who was an Insurance agent in Kearney Ne. She was beside herself at finding out Oscar had passed on his manuscript. I, on the other hand, was relieved at this interesting turn about. The manuscript was returned to her in Kearney and we enjoyed lengthy conversation on this fellows history. She had no plans at that time to do anything with Oscar’s book except to store it away. Her main concern was to keep track of his belongings as when he sold his farm he loaded all his saddles and associated tack in his truck and took it out to Hy-Gain feedlot South of town. He figured the cowboys out there would take care of and make good use of his equipment. Included in the offering was the Black hand made saddle in all its Silver laden decoration that , she said was conservatively valued at nearly 100,000 dollars. The saddle was eventually returned to Oscar by the foreman of the feedlot and sat in his living at my visit. Oscar passed away within the year and I have not talked with his daughter of late to see what they will do with the book. The guy was not well educated but his writing was dead on, in the folksy way he had of relating his experiences in a most turbulent an interesting time in American history. I know you guys have all heard of the depression days and it would of been tough for sure. Gerry and I had a recent conversation on the car pictured here and I found it while looking for the Wyoming racing at Guernsey in the 50’s. I am still not sure how much it was raced competitively as there were two Oscar Swansons during this time, but thier hearts were in the right place.
The other Oscar Swanson was the first to put mechanical turn signals on a Model T, that we know about around 1915. Have no idea of how many cars he built? His son in Round Table Lake Illinois sent pictures of some of his endeavors including the turn signal affair. He later went to college at Kearney State and became a teacher before opening a Ford Dealership at York Nebraska, where he lived out his life.