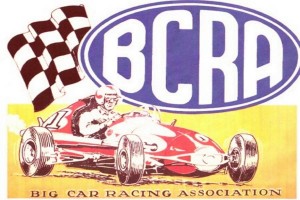 The Original Big Car Racing Association was revived at Denver, Colorado on October 14th 2003. The focus of the new organization was to preserve the history of the BCRA and to hold vintage exhibition events at venues once frequented by the club. Meetings were held on a regular basis and events were planned and enjoyed by the membership. The Association grew quickly through 2004, with members from some twenty states supporting the effort with yearly dues, which helped produce a much heralded Bi-Monthly publication of association history and activities. On Labor Day Weekend of 2004 a vintage race was scheduled for Norton Ks in conjunction with the Kansas Antique Racers and the Colorado Vintage Oval Racers. This activity followed suit with the history of the original club making its first out of state appearance at Norton in 1960.

In May of 2005 a reunion was held at Speedway Motors in Lincoln, Nebraska with a fine collection of Vintage cars on hand. An on track exercise was held at Eagle Raceway with owners, drivers and cars from Nebraska, Colorado, Kansas, Iowa and Illinois. The reunion in Lincoln caught the attention of several people from the region who came to take part. The first evening, and with the vintage cars parked on the Villager Motel parking lot, I would find two BCRA champions in Gary Swenson and Ray Lee Goodwin checking out the Sprinters on hand. From the East and North came Lew Holland, Pat Mandell, Mel Gitchel, Pat Mewes and Ned Frye from Illinois, Iowa and Minnesota. Mark and Doug Randol and Eddie McVay of Kansas City joined Lonnie Jensen, Joe Haag and Dan Andre of Lincoln, Ne along with Dan’s brother, Jan Andre of Idaho. Dan and Dave McGown of Fairbury, Ne brought out the Bob Slater car with Paul Tainter of Fremont with his 30’s Big Car. Kansan Mirl Barnett from Rexford made the trip with the Morosic Oldsmobile propane burner in tow. The Colorado contingent included Dick Surratt and Ody Fellows in town for the weekend. Bill Smith along with John Mackichan, were on hand as the cars were staged on the lot just west of the Museum on Saturday Morning. 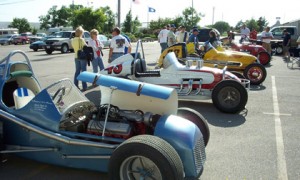 Tours of the Speedway Motors Smith Collection of American Speed were conducted and all were able to witness the continuation of racing history in this remarkable collection. Ody Fellows would receive the first ever, Don Budy Memorial award. During this event the topic of a Hall of Fame was discussed and added to the agenda for the next meeting of the club in Denver. 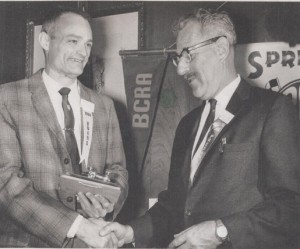 Ody Fellows receiving board member award from Don Budy in 1965 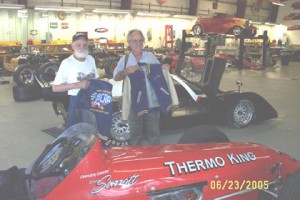 Back in Colorado, a tour of the Harry Matthews shop and collection of Sports Cars was scheduled and enjoyed by all. Bob Daly would show the Frenzel Lincoln he ran during his racing career, competing on the BCRA circuit and at Pikes Peak in the 60’s and 70’s. 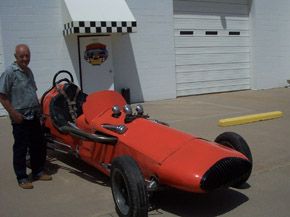