With the success of the reunion in Lincoln, the revived BCRA found the momentum to move to the next level of the project started two years earlier in Colorado. The formation of a BCRA Hall of Fame was approved by the membership and Board of Directors. With the history acquired of this Midwest Club, most were surprised at the membership as depicted on President Don Budy’s Roster. The officials and competitors who started the original BCRA, would establish a level of competition that from the beginning, continued to draw an ever increasing number of drivers and owners from the Midwest and Southwest region . By the late 60’s more and more competitors would come from the ranks of the International Motor Contest Association, United States Motor Club, California Racing Associaton, Arizona Racing Association and other circuits across the region. By the end of the 2005 season, the Hall of Fame project was under way with its home at the Smith Museum of American Speed, Lincoln, Nebraska. The BCRA Hall of Fame was established with the Nebraska Secretary of State and licensed in Nebraska with the first Induction Ceremony held in May of 2006. The inaugural class of inductees included many of the original members in Jack Hahn and Gene Novotny of Wyoming, Andy Anderson, Don Budy, Harry Iver’s, Karl Mismach, Orville Nance, Gordon Herring & Bob Armstrong, all of Colorado and Nebraska’s Curly Doggett. The weekend included tours and meeting at the Museum of American Speed, an on track at Beatrice Speedway, along with Bench Racing and lunch at Joe Haag’s Speed Shop in South Lincoln.

Since that time, hundreds of Biographies have been compiled in support of a selection process engaged by independent voters from six Midwest States. Their hard work has yielded eight Hall of Fame induction classes with 87 inductees including Drivers, Car Owners and Officials who have been honored in Lincoln. The Don Budy memorial award, “For Obvious Passion and Dedicated Devotion to Dirt Track Racing and It’s Competitors”, has honored 8 BCRA members for their dedication and significant contributions to the Association. Ody Fellows, Bill Smith, Tom Davey, Merle Holbrook, Bonnie Ivers, Bruce Budy, Clarence Froid and Donna & Jerry Norrick have all received this prestigious award. 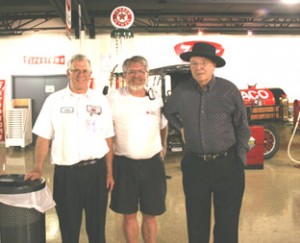 The history of the Big Car Racing Association and Hall of Fame is now available on this web site which will support the continued efforts to collect and organize the history. Big Car, Sprint and Modified competition in the U.S., which were so closely related through history, will also be included. We hope to begin adding personal biographies of Hall of Fame members beginning February of 2014. We planned this site to be available to members and other interested parties where they may interact and be part of a great project which is now entering into it’s second decade of existence.

Throughout the past ten years, we have had many contributors to the success enjoyed by the BCRA and Hall of Fame. These passionate Contributors include Ray Cunningham (Ks), Gerry Miller (Tx), Jim Bredenberg (Co), Gene Kruback (Ne), Mike Davey (Co), Dave Tyson (Mo), Wayne Panter (Tx), Jon Backlund (Mo), Bill Smith (Ne), Bruce Budy (Co), Leroy Byers (Co), Joe Haag (Ne), Jimmy McNeil (Ne), Jack Hahn (Wy), Andy Anderson (Co), Birty Blanot (Co), John Fochtman (Ne), Randy May (Ne), and Gary Wolfe (Ne). The Speedway Motors crew have been invaluable to the BCRA during its tenure at the facility in Lincoln, without it the project would have been nearly impossible. We offer many thanks to Bill and Joyce Smith, The first family of auto racing, for their support for the BCRA and Hall of Fame.