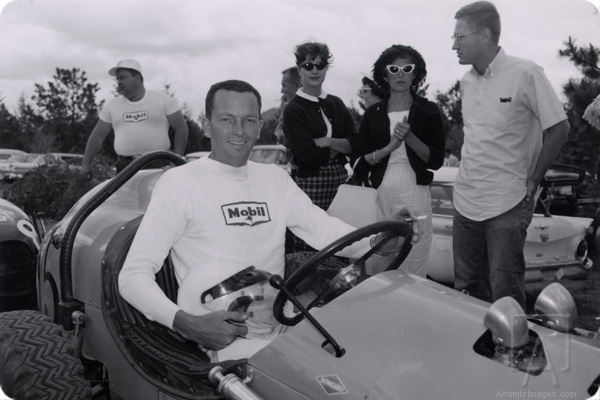 1957 Photo of Slim Roberts in his new ride, the #85 Frenzel Lincoln. A young Slim lived at Oshkosh Ne, the home of '21 Pikes Peak Champ King Rhiley, before moving to Colorado. Slim would start in the Roadsters driving for Harvey Wilson, Roberts would run the Mexican Road Race, at 6ft 5" was known to squeeze into a midget and flew a variety of early aircraft. Roberts was an accomplished crop duster and once sprayed locusts in Iraq and India at the request of the State Department. On the mountain he started driving for Bill Groves ('54)and Vince Conzy in '62 before before driving a Frenzel, with his last trip in the Unser car. The "best driver to run the Hill Climb who never won", I was told once. I still wonder about the '65 race.