During 1963 and 1964, the club continued expanding with races in Holyoke, Colorado and Guernsey, Wyoming. By 1965 BCRA was sanctioning races in Missouri, Oklahoma, and throughout Kansas including the fast Belleville High Banks. BCRA Championships were won by Colorado’s Eddie Jackson winning over a technicality with Dale Reed, driving the Chuck Mauro Offy Sprinter and Wyoming’s Jack Hahn in his own Chevy powered Sprint Car. Gordon Herring would lose his life at Owatonna, Minnesota August 23rd of ’64, while running with IMCA. Wichita’s Grady Wade would narrowly win the ’65 Championship over Hahn driving the Pius Selenke Chevy sprinter.

One of the highlights of the ’65 BCRA season was when retired veteran driver Lloyd Axel strapped into the Bud Shearston 270 Offy Hillegass Sprinter, and proceeded to win the feature at Greeley, CO after a thrilling wheel to wheel with young Cotton Farmer. Many remember that day at Greenwood and taking the track with the great American Sprint and Midget legend while displaying the utmost respect and admiration for Lloyd who had been retired for most of a decade. 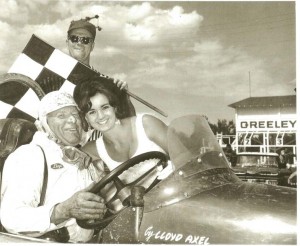 Lloyd Axel started racing in 1926 under the tutelage of Vic Felt. This photo captures the win at Greeley, CO 40 seasons later in 1965! Fans and drivers stood in awe of Axel’s performance at the Greenwood Park Oval, the last time this great driver and mechanic would stomp an “Offy” throttle from the cockpit of an open wheeler. 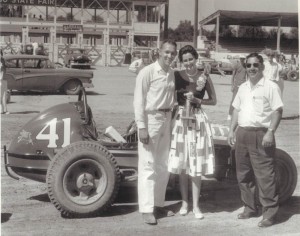 In 1966, the club ran all but one track outside Colorado for the largest purses in its history. It was also that year when the club experienced its first fatalities, as not one but two Colorado drivers, Lee Smith and Shorty Burkholder, were fatally injured at Wichita’s Air Capital Speedway in one night of racing. By then, the club was sanctioning shows at major Midwest State Fairs including the Kansas State Fair, and the Colorado State Fair. Car counts continued to be 50-60 plus Sprinters at a BCRA sanctioned race. Out of state drivers continued to flock to BCRA sanctioned races as well, including Californian Don Brown, Texan Gordon Woolley and future Indy Star Joe Saldana. At the end of the ’66 season, Wichita’s Jay Woodside had won the Championship with the much heralded Goodrich family of Belleville, Ks, winning the Owners Championship.