The 2014 BCRA Hall of Fame will take place June 27 at Speedway Motors “Smith Collection of American Speed” in Lincoln Nebraska at 6 Pm. There will be a 2PM tour for BCRA Members of the museum, just be at the front door at 2PM and tell them you are BCRA Hall of Famers. We will be at Joe Haag’s Speed Shop again on Saturday 28th, at around 11AM for Bench Racing and Lunch. 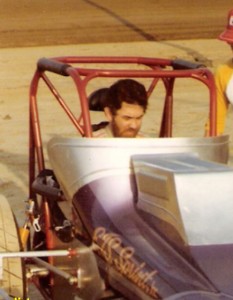 Five BCRA competitors will be inducted for 2014 which include Don Maxwell who migrated from New Mexico to Lincoln in 1972. His experience on the Southwest US tracks lent itself well to an early project with Butch Bahr and Jan Opperman in the creation of the Opperman/Maxwell Chassis which proved one of the fastest in the country in the 1970’s. Owners in Fred Aden, Bill Smith, Gary Swenson, Al Hamilton and Larry Swanson all enjoyed success in the new Sprinters with drivers like Opperman, Lloyd Beckman, Ray Lee Goodwin, Don Droud Sr, Dick Sutcliffe, Doug Wolfgang, Jimmie Oskie, Lonnie Jensen, Ron Shuman, Eddie Leavitt and Roger Rager.

Wichita’s Laverne Nance, was another fabricator whose genius was prominent on the plains of the Midwest from 1959 until 1993, where the Nance product became well known on the race circuits. Nance would take his product to the Bullrings of the region and enjoyed great success with drivers which became household names in Dale Reed, Harold Leep, Grady Wade, Jay Woodside, Roy Bryant, Al Unser Jr, Jan Opperman, Shane Carson and Sammy Swindell. 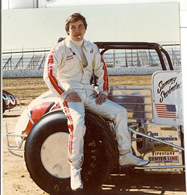 Tennessee’s Sammy Swindell would make his mark on Open Wheel history from the 1970’s to present as he continues with the WOO and Midgets across the country. Sammy would win over 110 Sprint car and Modified races from 1972 through 1976 before winning two BCRA Sprint Features and the last Big Car Racing Assoc. Championship at the Roger Mauro “Gold Cup Classic” in 1977. 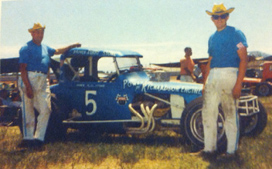 Wichita’s Jerry Stone would race in five decades beginning at the ripe old age of 17 in the Super Modifieds and gaining his credentials with the likes of Harold Leep, Walt McWhorter, Roy Bryant, Grady Wade, Frankie Lies, Forest Coleman and Jerry Everhart. From ‘72 to ‘77 Jerry would also run the family Midget powered by the first Wilson V-4( in ’73) and continued driving Supers for Jerry Wilson, Jelly Wilhelm and Shot Hampton. Jerry got his first Sprint ride in the Selenke Chevy in ’74, running with the BCRA and winning the Feature at Belleville . Stoney would run winged sprinters in Pennsylvania, won the USAC Midgets at the Seattle Kingdome and added 5 NCRA Titles before retiring in 1991. 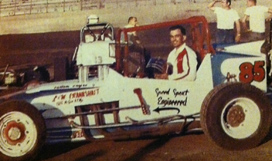 Missouri’s Gene Gennetten would race through three decades in Sprints, Supers and Midgets. Gene would win titles at Olympic Stadium in 1967,’68 and 1970. In IMCA, Gennetten would win his first race at Spencer, Iowa in 1972 while finishing 12th in points. In 1973 Gene would finish second in IMCA’s final point standings to BCRA Hall Of Famer Thad Dosher, but ahead of Bill Utz, Ray Lee Goodwin, and Buzz Rose. In the BCRA ranks at Belleville and racing against Steve Troxell, Don Droud, Ray Lee Goodwin, Jan Opperman, and Larry Clark, Gennetten would hold his own. He would finish as high as second place at the High Banks oval. With the demise of the IMCA and BCRA in 1977, Gene, like BCRA Hall of Famer Jon Backlund, turned his attention to the midget ranks. While driving, building, and owning his own midget Gene became a holy terror in the midget ranks in the 1980’s racing and winning with SLARA, SWIMS, MARA, and USAC. During this time he won two titles in SWIM’s, the Skoal Dash Series, three titles in MARA and winning races at Belleville and on the USAC across the country at venues in New York, Indiana and Illinois with a third place finish at the 1989 Chili Bowl in Tulsa.

This content submitted by Gary Wolfe of BCRA. Watch this site for any further details as they may become available.