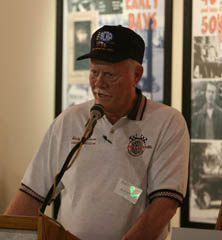 Gary Wolfe, President of the newly resurgent Big Car Racing Association, asked me to give an account of the early years of the original BCRA. I was happy to do so, especially when I found it was for the revival of BCRA.

It was my privilege to be associated with the club from 1964 through 1975. At the time, my background in racing included driving Big Cars in the ‘50s, and I had served as Starter for the Rocky Mountain Midget Association for 2-1/2 years. When I first became associated, my job was Pit Steward, and when Clarence Freud retired in ’65, I was asked to be Secretary/Treasurer. During the subsequent years, it was my honor to work closely with President Don Budy. Don was a great public relations man, and with my administrative ability, we made a great team until we both decided to retire in 1975.

In spite of having two artificial legs, the result of injuries received in World War II, Don served as Judge for all the races, and he was always there as a goodwill ambassador of Big Car racing. In addition, we had a permanent roster of dependable and capable officials. Our Starter was Carl Mishmach, Assistant Starter was Tom Bentz, Pit Stewards were Merle Holbrook, Charlie Gottschalk and Jan Lee. Bill Hill was our knowledgeable and talented Announcer. My wife Mary and I served as Scorers, most of the time assisted by our daughters Shari and Terry. We had a Safety Crew headed up by Bob Armstrong.

LeRoy Byers was our official Photographer, and our Historian was Don Budy’s son, Bruce. All of these talented people had many years of experience, with backgrounds in many facets of racing. During this period of time, his health required Don to take two years off, and Tom Bentz and Lloyd Wittenberg stepped in as President. In that time period, there was only one major disagreement between Don and myself. It occurred at Rapid City, South Dakota. Jan Opperman, driving for Bill Smith of Speedway Motors, pulled into the race a little late, with a roll cage on the car. At the time, Big Cars only had a low roll bar for safety, and Don loved their sleek look. He was very much against cages and made the decision that if Opperman did not remove the cage, he would not be allowed to run. After a short but heated discussion, and keeping safety in mind, Don finally relented and allowed Jan to run. He was the winner of the Feature event that day. As you know, cages then became commonplace, and practically every Big Car was equipped with one.

In the ‘60s and early ‘70s, BCRA sanctioned races in Colorado, Kansas, Oklahoma, Nebraska, and South Dakota. During my term, we had a number of great drivers (memory being what it is I am sure to omit someone), but they included Jon Backland, Lloyd Beckman, Frank Brennefoerder, Roy Bryant, Ray Lee Goodwin, Lonnie Jensen, Opperman, Dale Reed, Dick Sutcliffe, Grady Wade, Doug Wolfgang and Jay Woodside.

One of the favorite tracks where BCRA sanctioned races was at the High Banks of Belleville, Kansas. For many years, BCRA races were the highlight of the North Central Kansas Free Fair. Also, Belleville was the birthplace of the High Banks Hall of Fame. Among the former BCRA members enshrined there are car owners Red Forshee, The Goodrich family, Lonnie Morosic, LaVerne Nance, Bill Smith and Chet Wilson. Drivers included Backland, Beckman,
Brennefoerder, Bryant, Goodwin, Opperman, Reed, Woodside, and Wade. Officials inducted included Bill Hill, Byers and Budy, while yours truly was inducted partly for driving and partly for officiating. Les and Beryl Ward were inducted under the Media banner. They not only reported all the BCRA races, but had been actively writing race coverage articles for newspapers including National Speed Sport News for many, many years.

As can be readily seen by all the names of people in different categories, they all contributed much toward the many years of BCRA success and involvement in Big Car Racing, or Sprint Car Racing as it is known today. I am sure that this new birth featuring the Vintage Cars, by the talented people involved today, will bring back those good old years. Yes, I can honestly say that those were the good old days, and I feel honored and privileged to have been a part of that era.