Memories by Art Meyers (On Right) 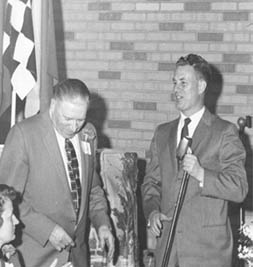 As I think back to the ‘50s, most of the cars that would eventually run in BCRA only raced once a year at Pikes Peak Hill Climb. Why not other races? So the BCRA was formed and sanctioned races in Colorado the first year.

With safety in mind, we promoted a portable light system (standers reaching out over the track in turns one and three) that was controlled from a vantage point instead of the flagman. This took a lot of wire and work. I remember, with the help of my wife Janet, picking up the wire after a rain at the state fairgrounds in Pueblo, CO.

By the way, just a couple of months ago, Wayne Weiler reminded me of how he and Chief Mechanic Joe Pittman took the Fike Plumbling Special up to Colorado from Arizona and won the two-day state fair event in 1958. Please stay in touch Gary, and good luck with your project, the revival of BCRA.