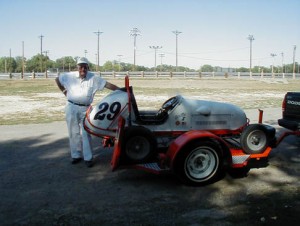 Out here in the plains of central Kansas, one didn’t have much contact with Sprint cars, especially for someone who was only an occasional fan of the local Jalopies. After a brief spurt of interest in 1960, the interest had dwindled to two or three shows a year.

One day, a poster in the window of Matthew’s Hardware caught the eye. It was advertising sprint car races at Belleville, KS on the upcoming Memorial Day. Having heard of Belleville, curiosity took over and on the appointed day, off we went. One might call it a life altering experience. The whole atmosphere was different, even the fairgrounds it self was intriguing. The WPA type stone grandstands, the covered wooden grandstands, the steeply banked track, the mowing machine wheel turnstile, a balloon vender with a large assortment of his wares, calling, “Get a balloon for little Willie.” It was quite different from primitive little Mohawk Speedway, a flat 1/4-mile with splintery plank bleachers and a scratchy PA system blasting out “Purple People Eater.”

And the cars! Far different from the Mohawk Jalopies! Cars’ powered with Lincolns, Oldsmobiles, Plymouths, GMC’s and Mercurys, great stuff. Then the
Stockwell and the Herring Offy’s were fired up. An Offenhauser, right here before us, and the sound!! No OHV V-8 ever sounded that good, (then or now)!!! One must not forget the Novotny GMC, it’s sound was very unique. Even the car numbers had class, like B4U for example. And the announcer Bill Hill came on. Far better than today’s disc jockey from the local radio station filling in on weekends. Here was a guy who knew and cared about what he spoke of. Little tidbit’s like, “The #16 from Illinois was the 1952 Indianapolis winner,” or “The #15 was the former Frank Luptow Black Panther,” or “The car driven by Jim Golden was formerly a Federal Engineering Special.”

Bill explained to the un-informed in the crowd about how some of the cars before us were Hill Climb cars now set up as Sprint cars, the owners wanting more places to run that just “up the hill.” Some were for real Sprint cars with the latest and greatest, some low-buck operations. He had something to say about every car out there as well as knowing most everyone in the pits. He made it come alive!

The club being from Denver, so were most of the cars and drivers. Some hailed from Kansas City and Topeka, and one could always count on several from the Lincoln, NE area. Wichita always had some of the better cars too. Then there were real travelers, who came from places like New Mexico, Illinois, Texas and Missouri, even California. We always had to watch David Ross uphold the honor of Western Kansas and watch the tribulations of
Ron Wilcheck, the lone Hutchinson, KS driver. Then there were stranger’s with names like “Odie,” “Lil Joe,” “Whitie,” “Red” and “Spider” to liven things up a bit.